Here's an easy to read explanation of how servos REALLYwork. This servo tutorial will focus on the concept of Pulse Position Modulation (PPM), which is the radio language that all receivers use to communicate with servos.

Did you know that PCM receivers translate the PCM signal from the transmitter to the PPM language for the servo to understand?

A servo consists of a small DC motor, small set of gears, a potentiometer, and electronics for controlling feedback. 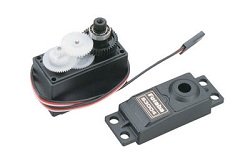 Each servo has three wires. A series of relatively low voltage control pulses are sent to the servo from the receiver through the white wire. The black and red wires provide the electrical power needed to operate the DC motor.

Are you wondering how it does this? It does it exactly the same way cruise control maintains the same speed going up hill or down hill. Both servos and cruise control use feedback.

Instead of a speedometer, a servo uses a potentiometer (pot) for feedback. The potentiometer is a resistor that changes resistance as it rotates. It is mechanically coupled to the servo's motor and gears so it rotates with the servo motor.

The most important thing to remember from this servo tutorial is that all standard servos use the Pulse Position Modulation (PPM) language.

A pulse is simply whether or not the control voltage is on or off. The amount of time that a pulse is on during a 2ms time frame dictates the servos position. This time frame, or sequence, repeats around 50 times per second.

Take a look at the chart below to help you better understand this servo tutorial. The amount of time during the designated 2ms time frame that the pulse will be on for the three most extreme positions(far left, far right, neutral). There are an infinite amount of positions in between these values and amount of time the pulse is ON changes in proportion. This infinite nature of possibilites is what makes pulse position modulation analogue instead of digital. 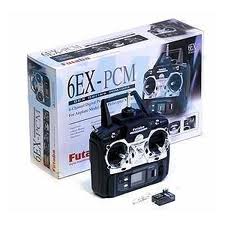 The purpose of this servo tutorial was to give you a very basic understanding of how a servo works. Check out the RC Servo Page for more information servo specifications and help with choosing the right servos for your RC airplane.