Position:Home > About RC Hobby > About Robotics

Choosing the right RC servos for YOUR RC airplane is much easier than you might think. Servos are literally the "muscles" that control every moving part of our RC airplanes. 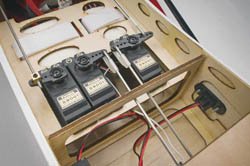 Servos actuate the control surfaces, throttle, landing gear, smoke, and anything else aboard the airplane that needs our input while in the air. Different types of servos are better suited for different applications, each with advantages and disadvantages.

This page you will explain the different types of servos and options available in order to help you choose the right servo for your application. If you're interested in how servos actually work and how they communicate with your receiver and transmitter then be sure to check out this tutorial on RC Servos.

The literature for just about every RC airplane, whether it be a kit or ARF, will recommend a certain servo. Many times the recommendation will be a specific model servo of a brand they support.

It's always safe to stick with what the manufacturer suggests. But what if you want a different brand to match your radio? Or maybe you want better performance out of your plane?

You want a servo than can handle the torque required to move your control surfaces quickly and precisely. A servo's characteristics are defined by the following specifications.

As you can see in the specifications for the Futaba S300 standard servo above, the torque and speed depends on the voltage of your onboard battery.

The majority of servos are powered by 4.8V.  Upgrading to a 6.0V receiver battery is a great way to increase the performance of your servos and possibly extend flight times. Make sure you take the added weight of a larger batter into consideration... 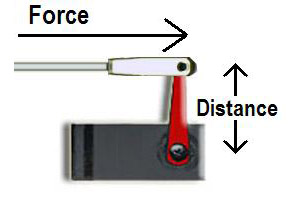 Torque is a measurement of the strength of a servo. Torque is determined by multiplying the force acting on the servo arm by the distance from the center of the servo.

As the size of an airplane increases, the wind resistance acting on the control surfaces increase. This is why larger airplanes need RC servos with more torque than smaller airplanes require.

However, the size of the airplane isn't the only factor that determines how much torque you need. The type of airplane you have as well as your flying style will ultimately determine how much torque is required of the servos.

3-D airplanes have very large control surfaces which require much more torque than a non 3D sports planes of the same size. Also, if your flights tend to be gentle and laid back, you can by with less torque than someone who likes to jerk the sticks around to perform crazy violent maneuvers.

The speed of an RC servo is defined as the minimum amount of time it takes the servo arm to rotate 60 degrees at maximum rated torque.

Don't be deceived by the speed rating. The "top speed" of a servo isn't an accurate measure of how quickly the servo responds to your stick movements.

Speed is a very important specification, but there are other factors that we will discuss below that will ultimately determine how quickly and precisely the servo responds to your input.

The dimensions and weight of a servo is directly proportion to the torque requirements. Micro RC Airplanes use a small servo where as Giant Scale Airplanes require very large servos. This is fairly self evident and is more or less common sense...

There are RC servos specifically designed for just about any size RC aircraft out there. The first step is to find a servo that meets your torque requirements, then make sure the weight and dimensions are suitable for your airplane. 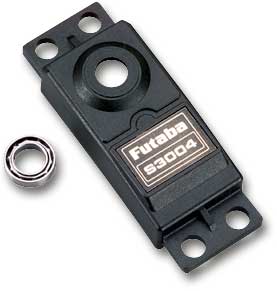 The shaft of an RC servo is supported by either a ball bearing or a bushing. A servo with bearings will operate much more smoothly and will last much longer than a bushed servo.

Most standard size servos these days will have either 1 or 2 bearings on the output shaft where it exits the servo case. Many micro servos do not have bearings because the loads are too small to justify the added weight of bearings. In contrast, most large scale servos need two bearings to support the large loads of the control surfaces.

Kits are available that supply the ball bearings and case tops in order to replace the bushing with bearings. These kits provide a very economical way to upgrade your servos without having to replace them.

Most servo gears are made from a type of plastic called nylon. Sometimes under excess torque these plastic gears will strip out. If you're lucky, you will get some warning signs before having a catastrophic failure that destroys your airplane. But there have been a many of crashes due to stripped servo gears.

Many large scale or 3D pilots will buy RC servos with metal gears. These are bit more expensive and they weigh a little more. But they will withstand a lot more torque than standard plastic gears. The only downside, besides the added weight, is that metals gears will wear over time and this leads to slop in the servo. This wear happens slowly and gives you plenty of warning, as opposed to set of nylon gears that has the

If you've been shopping around for a servo you have probably noticed the different types of servo motors available. You will see 3P, 5p, coreless and brushless. So which one should you choose?

3P and 5P
Most RC servos on the market are either 3 pole(3p) or 5 pole(5p)motors. All DC motors have a set of permanent magnets that the electromagnets(windings) are attracted to. These permanent magnets are called poles.

The torque of the motor can be reduced if the electromagnets happen to be precisely in between two poles when the servo is trying to hold position. In other words, 5P motors will have more holding torque with smoother operation than 3P motors. If you're a beginner, there probably isn't enough difference that you would even be able to tell.

Coreless Motors
In a conventional motor, windings are wrapped around a metal core to form the electromagnets. A coreless motor does not have a core. The windings consist of a wire mesh that rotates around the outside of the permanent magnets.

This eliminates the problem with reduced torque at certain positions as discussed above with standard "pole" motors. A coreless motor will also respond much quicker to stick inputs because it doesn't have to overcome the momentum of a metal core when changing directions.

Brushless Motors
Futaba has recently developed a brushless servo motor. So you get all the benefits of a brushless motor incorporated into your servo. This translates into longer servo life, faster response time, smoother operation and resistance to vibrations.

It is important to note that you can't just swap the pos.(+) and neg.(-) to reverse the servo. Doing so may damage your servo and receiver. You can buy connectors that act as a servo reverser by reversing the control signal. A Y connector is commonly used with two ailerons servos that share the same receiver output. The Y connector reverses the signal to one servo so that the two aileron servos act opposite of one other.

Futaba's "J" connector is a plug with a little plastic tab, or key, that prevents you from plugging it in backwards.

Futaba's J plugs, Airtronic's Z plugs, Hitec's S plugs, Hobbico's U plugs, and JR's connectors are all compatible as long as you make sure the wires are in the correct order within the plug. If you want to plug a male Futaba plug into another brand you will have to shave the safety tab off.

If your servo is a different brand than your receiver, it is critical that you have the appropriate wires lined up before plugging the connectors together. The wires can easily be popped out of the connector for rearrangement.